You’re No Fung Anymore: There Really Is Such Thing as Red Flag Knowledge in Copyright Law

Also, There Really Is Such Thing as Copyright Inducement

Hot on the heels of the new and improved opinion in the Veoh case (discussed last time), we also have Columbia Pictures Industries, Inc., et al. v. Gary Fung & IsoHunt Web Technologies, Inc., another important 9th Circuit decision construing the major DMCA safe harbors. We’ve actually discussed the case before because it was—and as far as I am aware—the only case in which a service provider was found to have had enough “red flag” knowledge to be deprived of the DMCA safe harbor. 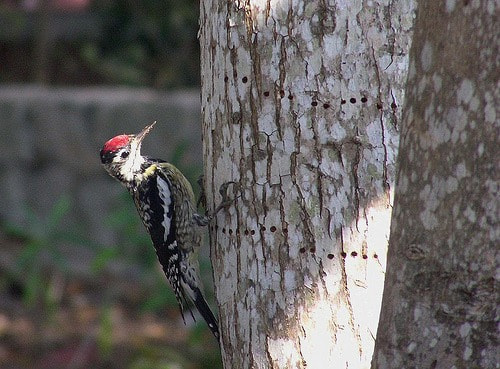 The rare yellow-bellied sapsucker is a close relative of the even rarer red-flagged sapsucker. Photo by Phillippe Boissel, under Creative Commons license.

I’ve said previously that “red flag” knowledge will be found only in extraordinary situations, and nothing since then has changed my mind. The problem is that “red flag” knowledge is clearly objective knowledge (in contrast to the subjective nature of actual knowledge). Lawyers are actually used to these standards, more classically stated as “knew or should have known.” In many cases, knowledge requirements are important, but even so, we don’t like to limit them to purely subjective knowledge because it becomes too easy to lie about one’s own knowledge. Also, it creates the perverse incentive to be stupid and ignorant. So we also allow proof showing facts and circumstances that would make a hypothetical reasonable person—not the specific defendant, who might be a careless moron—aware that something fishy was going on.

Usually this takes the form of:

Under the DMCA safe harbors, however, service providers are absolved from having to monitor or investigate their own systems under the DMCA, so in proving “red flag” knowledge, we have to do without step 6. Good luck with that.

So what are A, B, C and D? Well, to know that, you first need to know what Fung was doing. He operated, personally, a series of websites that hosted torrent files for content that any fool would have realized was infringing, e.g., for top-grossing movies still in release.* Fung encouraged his user base to provide new torrent files and use the ones currently available. He helped some of his users with the process. He even used his own website to download obviously-infringing movies.

* In the near future, this might not seem so crazy, as movies start being distributed over the internet at about the same time as the theatrical release. But for now, you know that, because it was only released last week, The Croods (seriously, that’s the top-grossing movie this week? This reference isn’t going to age well…) isn’t going to be legally available for download now.

The court held that these four facts added up to “red flag” knowledge. In the absence of a really good explanation from Fung, this proof was enough to pull him out of the DMCA safe harbor. Apparently, Fung had no good explanation.* Zap goes Fung’s safe harbor.

* It’s more complicated than this. What happened was the plaintiffs moved for summary judgment, with enough evidence to prove these facts. Fung could have opposed that proof by (1) attacking the evidence (as unreliable or open to a different interpretation), or (2) putting forth his own evidence that undermined the plaintiff’s evidence. Fung chose not to do that. Instead, he asked the court for more time to conduct discovery—a risky, risky strategy that completely backfired. The court denied the request, and Fung was stuck with the record as it was. On appeal, he could do nothing to supplement it. Fung was represented by competent counsel, so I doubt this was some major attorney blunder. Either Fung didn’t assist counsel sufficiently, or a cost-based decision was made to put all the eggs in a different basket.

Alas, the court didn’t tell us how many “red flags” of what size and which shade of red constitutes safe-harbor-zapping “red flag” knowledge. What if Fung knew only A, B & C but not D? Or just A & B? How far from the edge of the “cone of ignorance” was Fung? My strong suspicion is that Fung doesn’t quite represent the floor of “too much knowledge,” but he’s close.

Grokking Inducement for Fung and Profit

It turns out, though, this wasn’t the best part of the 9th Circuit’s opinion, because Fung is extraordinary in a different way: he was actually found to have induced copyright infringement.

Inducement of copyright infringement is one of the three main ways you can be liable for copyright infringement without actually doing the deed yourself.* It’s a fairly new concept, having been developed by the Supreme Court in the Grokster case back in 2005. Back when Grokster came out—I actually wrote an article about it, which I can’t locate anywhere now—I think I confidently said that no one would ever be found liable for inducement again, because no one would be fool enough to leave enough evidence to prove intent around again. More fool me, I guess.

* Technically, inducement is a subset of contributory infringement because it has an intent requirement, in contrast with vicarious liability. But I think it’s much more useful to think of it as a separate type, especially since the intent requirement is so rarified.

In Grokster, the Supreme Court announced the “inducement rule” for copyright, having borrowed it from patent law: “[O]ne who distributes a device with the object of promoting its use to infringe copyright, as show by clear expression or other affirmative steps taken to foster infringement, is liable for the resulting acts of infringement by third parties.” The Ninth Circuit distilled this rule into four elements: “(1) the distribution of a device or product, (2) acts of infringement, (3) an object of promoting its [i.e., the device or product] to infringe copyright, and (4) causation.”

Although Fung vigorously contested elements (1), (3) and (4), it’s pretty obvious that the main action is going to be element (3): having “an object of promoting its use to infringe copyright.” It’s because of this element that I thought we’d never see another successful inducement case. It looks like a subjective standard*, with a heightened standard of proof. You can prove it indirectly. And the Grokster defendants produced lots of documents that made it clear what its objective was, most notoriously by targeting former Napster users with promotions indirectly touting their software’s ability to access copyrighted music. In the future, I thought, people will learn from Grokster’s experience and take more care not to produce and distribute such things.

* It’s worth pondering why this isn’t such a problem in patent law. It’s a fairly common fact pattern in patent law that the defendant is accused of instructing customers to use a product in an infringing way. But the defendant doesn’t need to know that the use would infringe a specific patent, only that a certain action (that happens to be infringing) will result. By contrast, we appear to require rather more in the copyright context. In Fung’s case, for example, it doesn’t appear to have been enough that he knew downloads would result from his actions, but illegal downloads would result. This intuitively makes sense: otherwise, whole technologies—far broader than those covered by a single patent—would be illegal pretty much forever.

Bear in mind that Fung did not host the actual infringing content. He hosted and dealt with only torrent files. A torrent file is a necessary step to invoking the torrent download of a file (which obviously doesn’t have to be illegal). Most of the work is performed by the so-called “swarm” of user computers that upload their bits of the requested file to the internet, and the requester’s computer, which assembles them into a working file. He’s not a direct infringer. The requester is.*

* A very pertinent question is whether the contributors are, as well. I choose not to have an opinion on that question at this time, but it’s an important one because there are hundreds of “BitTorrent” lawsuits, usually involving pornography or B-movie duds, based on this theory, most of which use highly controversial methods of obtaining settlements. I’ve previously blogged about those in a different context here, here and here (among other places).

What if Fung did nothing more than create a directory of torrent files that were hosted elsewhere on the internet, perhaps on off-shore servers? Would that constituted inducement? The notorious myVidster case suggests it would not, since Fung would not have sufficiently encouraged the acts of infringement.

Why go to the trouble of proving inducement in the first place? Why not just argue plain contributory infringement? All you need to prove is intent and material contribution. One reasons is how a previous well-known Ninth Circuit opinion dealt with Grokster. That case, the misleadingly titled Perfect 10, Inc. v. Amazon.com, Inc., involved Google’s image search feature, which inevitably displayed unauthorized copies of the plaintiff’s pictures. After holding that Google didn’t directly infringe Perfect 10’s copyrights by, for example, maintaining cached copies of the files, the court took up the issue of whether Google contributorily infringed those copyrights by causing user’s computers to display full-sized images being stored on third-party servers. The court answered: maybe, if (1) Google had actual knowledge of that the images on those servers were unauthorized (i.e., infringing), (2) Google could have taken “simple measures to prevent” the infringement, and (3) Google did not take such measures. The case was remanded, and that’s the last we heard of it.

It seems that, under Perfect 10*, Columbia Pictures shouldn’t have had to go to such great lengths to prove intent. Fung had actual knowledge, and he didn’t just fail to prevent infringement; he made it happen. By contrast, with Google, the fact that unauthorized images exists was hardly Google’s fault–the third-party sites were the ones who made the images publicly available.

* There are multiple reported and unreported decisions involving Perfect 10, so don’t get them mixed up. Also, this Perfect 10 decision stand for lots of things beyond this.

I wish I could explain to you how Columbia Pictures ended up relying exclusively on an inducement theory (and in the end, hey, the result was pretty good). Its summary judgment brief was filed under seal, and its appellee’s brief wisely didn’t do anything to disrupt the lower court’s decision.

This raises a more interesting question: can we reconcile Perfect 10 v. Amazon with Fung? On the one hand, Perfect 10 involved automated technology that incidentally swept up infringing material, while Fung involved the creation of a system that greatly assisted infringement. Yet, the test for contributory infringement seems tougher against Fung than against Google, which doesn’t make sense.

We could just say that the Fung court used a tougher standard than necessary. Or, we could point out that the standard against Google isn’t necessarily tougher, because we never did find out whether Google could have taken those “simple steps,” or even how “simple” those steps have to be. Still, Fung doesn’t fit well with Perfect 10 v. Amazon.com. Perhaps, Perfect 10 v. Amazon.com is just dying the death of a thousand cuts*, and this is just one more cut.

* Notoriously, Perfect 10 v. Amazon.com was heavily distinguished by another Perfect 10 opinion, issued by a different panel that came just after, Perfect 10 v. Visa Int’l, should have effected a near-overruling. But then the Amazon.com panel withdrew its opinion and revised it, without altering the main holding, after the Visa Int’l opinion.