A little bit of legal knowledge can be a most troublesome thing.
Readers of The IP Breakdown know that implied copyright licenses1As opposed to express copyright licenses, where the terms of the license—the license’s terms and scope—are spelled out, ideally in writing. Implied licenses arise from the parties’ conduct and from reasonable expectations, which don’t always match up with the parties’ actual expectations. are best avoided, particularly if you’re the licensee, though they’re usually considerably better than, well, no license. There are several problems with implied licenses. They’re (by definition) not exclusive, which means your competitors can use the work in question. The scope of the license is undefined. You don’t know what you’re allowed to do with the work in question until a court issues a ruling, by which point—well, things are already in a bad way.
Implied licenses aren’t great if you’re the licensor, either. The lack of definition makes it harder to enforce the license’s terms. You say to your licensee, “Stop doing that or else!” or “Pay up!”—and your licensee says, “Where does it say that?” or maybe even “Come at me.” 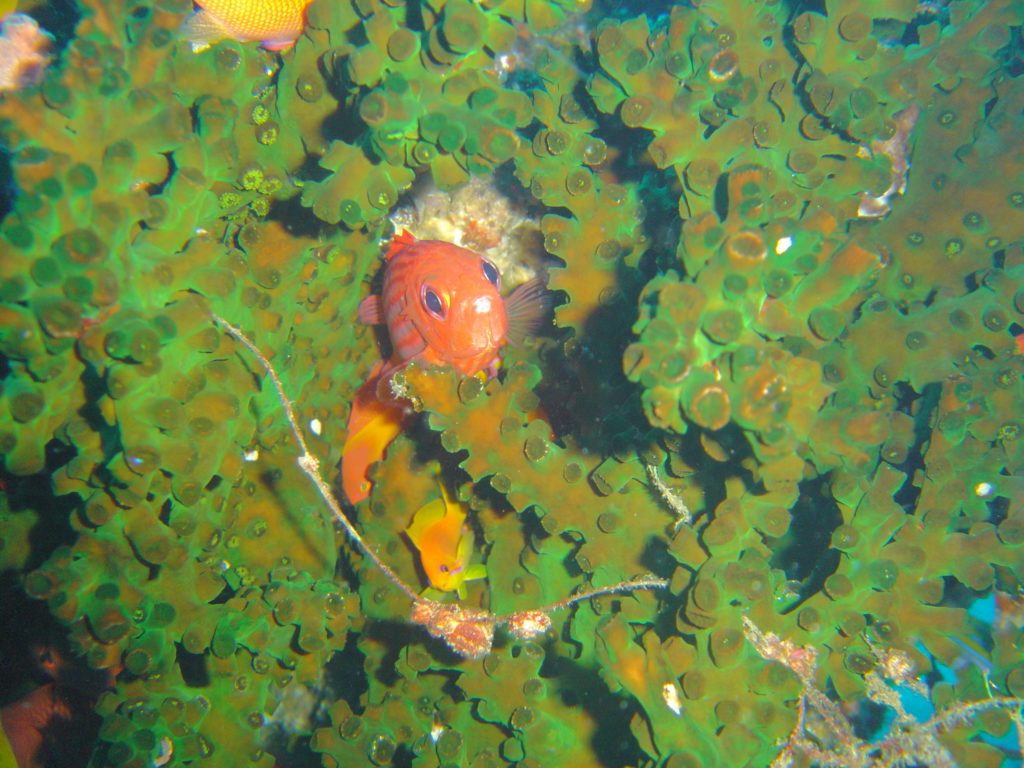 Lime(colored) coral to career-building fish: “I’ve got you now!” Then it watches the fish swim casually away. (Photo by Pbsouthwood at wts wikivoyage)

Still, before you get too deep into these messy, slippery weeds, you might want to consider a more fundamental legal principle: don’t be a %$*!#. Nobody likes a %$*!#.
The law tolerates a lot of not-nice behavior: sharp-elbowed competition, turning a tenant out of a space with little notice, burdensome contractual provisions that consumers can’t say no to, etc. But there are some forms of unfairness that courts won’t tolerate, and if the law doesn’t forbid it, they’ll find some way to prevent it.

In LimeCoral v. CareerBuilder, CareerBuilder asked LimeCoral to create some “media files” (otherwise unexplained). Instead of just paying a fee for them, CareerBuilder agreed to route a certain portion of its “online design service orders” to LimeCoral.2When CareerBuilder entered into this agreement, in 2008, it was in pretty bad shape, though it was on the verge of turning itself around. This might explain the unusual terms of the agreement. The parties entered into a written agreement describing these terms, which presumably included an express license for CareerBuilder to use LimeCoral’s creations (which, among other things, permitted CareerBuilder to make derivative works). LimeCoral, however, retained ownership of the copyright in the creations, which was smart, but as it turned out, not smart enough.
Things went well (as far as I can tell). The written agreement expired, but no one seemed to notice or care. CareerBuilder kept using LimeCoral’s creations and kept sending LimeCoral work; and LimeCoral kept preparing media files for LimeCoral. In 2014, however, CareerBuilder cut the amount of work it sent to LimeCoral, and did so by enough to annoy LimeCoral. LimeCoral purported to revoke the license at this point. When CareerBuilder objected and kept using LimeCoral’s creations, LimeCoral sued for copyright infringement.
This sounds like a sticky wicket! How much work was CareerBuilder supposed to keep sending LimeCoral to keep the license? Could LimeCoral just revoke the license, and if so, how much notice would it have to give CareerBuilder? What about creations already delivered?
Normally, in situations like this, the uncertainty causes the parties to come to an arrangement.3Unfortunately, because large companies can afford litigation more easily than small ones, they gain an undeserved bargaining advantage. Small companies just have to be more careful. But this case has a twist, which might also explain why no arrangement was reached.
You see, LimeCoral was being insincere. It actually was aware that the written license agreement had expired, yet kept supplying CareerBuilder with media files uncomplainingly. LimeCoral believed—apparently after consultation with lawyers!4[ref]The court actually held this against LimeCoral, but I don’t see how. The court couldn’t have known in detail what legal advice LimeCoral sought or what it received. Courts shouldn’t discourage people from seeking good legal advice.—that CareerBuilder was an infringer, and that the longer CareerBuilder kept using the media files without a license, the more trouble it would be in. LimeCoral planned to use the threat of litigation to extract more money from CareerBuilder than it would had if the parties just negotiated a new license as companies normally would.
How do we know this? Oh, LimeCoral’s principal bragged about his scheme to friends. In 2012, he wrote to a friend:

No contracts in place. No Work for Hire Agreement in place. … And then to top it all off, I will go after any/all design vendors … or clients who use my work as well.5I.e., he intends also to sue downstream users of his works. Not to mention the hundreds of thousands of dollars in extra revisions they own on, the licensing fees for future use of my files … and then a slew of damning evidence I have collected over the years. Watch and learn my friend. They caused me a lot of pain and I’m going to go Monte Cristo6A reference to the novel, not the sandwich. In the novel, the protagonist, who had been wrongfully imprisoned but had escaped, went about acquiring a fortune expressly to wreak vengeance on those who had wronged him. His scheme of vengeance is rather more complex than LimeCoral’s. on them one day. He who laughs last, is he who wins.

LimeCoral must have been surprised when CareerBuilder—having consulted better lawyers—refused to play ball. I don’t know if CareerBuilder laughed, but it appears they’re going to win.

To the court, LimeCoral’s duplicity made a difficult case easy:

The undisputed facts also show that LimeCoral is attempting to gain an unfair benefit from the relationship it formed with CareerBuilder, which is part of the purpose in the law for the implied license. The implied license is intended to prevent a work creator from providing a work for use and then waiting until the recipient cannot feasibly complete its business without the work. Such a result would effectively allow the creator of the work to hold the recipient ‘hostage’ and extract an unjust benefit from the recipient because at some point in a project it would be too costly for the recipient to find another party to create the needed work.
…
LimeCoral has not produced any evidence that would enable a reasonable trier of fact to conclude anything other than that LimeCoral laid in wait for years and years in anticipation of a big pay day either by obtaining a judgment against CareerBuilder in litigation or by extorting a settlement from CareerBuilder.

The court undoubtedly reaches the correct conclusion, but I’m going to quibble a bit with the analysis. The court presents the issue as one of fundamental fairness, as though the defense of implied license were equitable. It is not. It is a license like any other, only implied by conduct, rather than expressed in writing (or otherwise). So the issue isn’t that LimeCoral is being a %$*!#. It’s that the parties’ conduct clearly implied a license. And, while the precise terms of the license might be unclear—for example, we do not know how much “online design service orders” CareerBuilder was obligated to routed to LimeCoral—it is quite clear that the license did not include a term permitting LimeCoral to suddenly terminate the licenses when the amount of such work got too low.7Sometimes a court doesn’t need to construe what a contractual term means, in order to rule on a legal dispute involving that term. Sometimes, it just needs to construe what it DOESN’T mean. It’s just not something we’d expect reasonable people to agree to. That’s a problem with implied licenses: the terms are what a court thinks is reasonable, not what you might have wanted.
If LimeCoral’s real complaint was the reduction of “online design service orders,” its remedy was to sue for the profits it no longer could make because of the reduction. But—and this is a general rule for all license agreements, whether implied or otherwise—the breach of a license agreement by the licensee does not normally give the licensor the right to revoke and convert the licensee’s uses of the copyrighted work into infringing uses.8There are two important exceptions, not at issue here. First, if the use of the copyrighted work goes beyond what is permitted in the license agreement, then those uses are infringing uses, which can truly be dangerous. Second, if the term that the licensee breached is really a condition on use of the copyrighted work, then the license is revocable. Instead, the result is just a regular old breach of contract.9As it happens, LimeCoral did also sue for breach of contract, but not for the reduction of “online design service orders.” If I had to guess, that’s because doing so would be inconsistent with LimeCoral’s theory that there was no implied license in the first place. LimeCoral’s case for breach of contract was premised on additional oral contracts the existence of which it couldn’t prove.
But the lessons here are simpler. First, you never are as clever as you think you are. And second, don’t be a %$*!# is not only pretty good life advice. It’s pretty good legal advice, too.
Thanks for reading!