Google v Oracle (Part 3): Why Copyright Is a Bad Fit for Software

NOTE: This is the third (and final) in a series. Part 1 is here. Part 2 is here. See Part 1 for my sources for information about the trial.

But it’s All We’ve Got 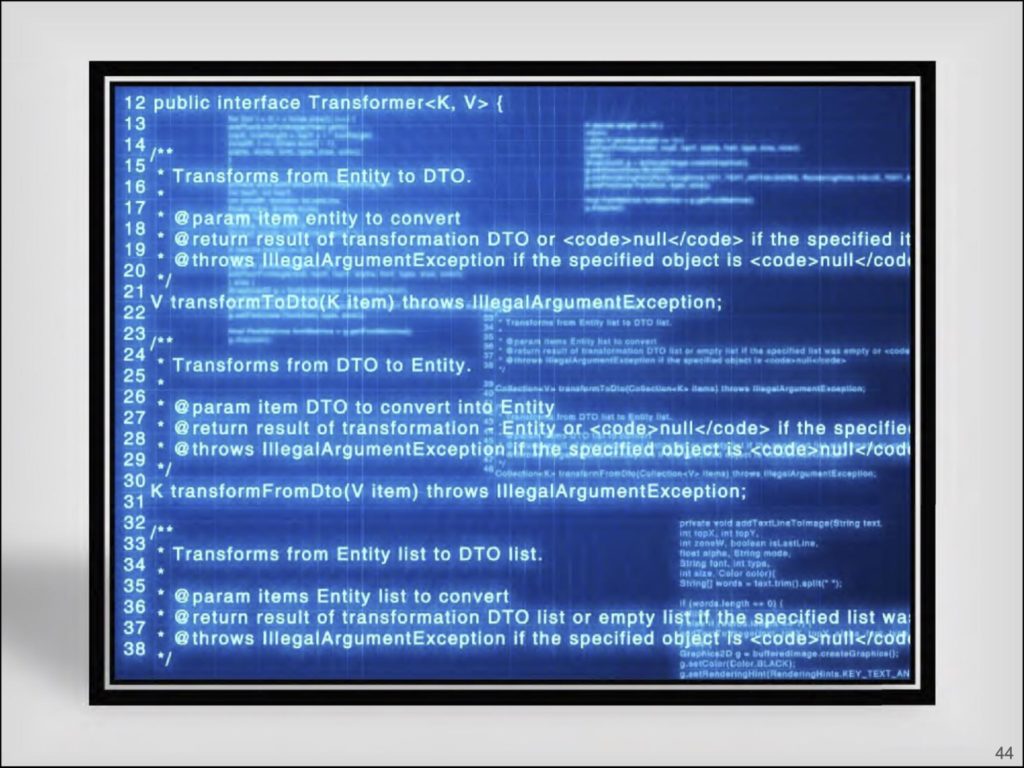 Coding as art? (From Oracle’s slides used in its closing arguments.)

Lawsuits are often disappointing to interested observers, even when their “side” wins. Lawsuits resolve disputes between parties. They only incidentally—and haphazardly—make law. Courts make law through precedent, which means a lower court cannot diverge from a “holding” of the court. By definition, trial courts, like the one that just heard Oracle v. Google fair use trial, cannot make law, since there are no courts below it. Still, decisions rendered by trial courts can still be powerful “persuasive” authority. Another trial court, faced with a lack of precedent, can read how other trial courts handled the question and say, “That looks like the right way to handle it.” They can also say, “No, that’s not a good way to handle it.” But it is natural for trial courts to herd on difficult and highly-publicized cases, especially in the U.S. legal system, which values consistency. The basic fairness principle underlying precedent is that like be treated alike; district court herding promotes that.

It’s nice to think we know what’s legal and what’s not. It’s weird—but true—that we often do not. It’s nice to think that if you know X did A, B & C and a jury found no liability, you also can do A, B & C without worry. It’s weird—but true—that you still need to worry, just less. If proving A, B or C requires a jury finding—say it involves reasonableness—or is subject to competent proof, a different jury might reach a different conclusion. Indeed, the different juries can view roughly the same facts and reach radically different conclusions.

Bright lines are nice: you stay on that side of the line, you’re OK; but if you cross it, you’re in trouble. The law recognizes the utility of bright lines. But it also recognizes that life is too complex, and human actors are too clever, for bright lines to resolve, with any justice, all the disputes and folly of human existence. Common sense is nice, except when it masks prejudice. Telling them apart is hard. We do the best we can.

It’s a Roadmap, and Maybe More

Despite all this, if you really feel that APIs should never been copyrightable, the jury’s verdict—and the judge’s confirmation of that verdict—in Oracle v. Google is still a step in the right direction. Assuming we’re really just talking about API libraries and how they’re organized, and any code that just necessarily reflects that organization, then Google has just presented us with a roadmap, one that isn’t terribly difficult to replicate.

More important, this strategy worked well even though Oracle was dealt a very strong factual hand. Oracle had emails from Google employees admitting that they were engaging in copyright infringement and that it wasn’t fair use. Good thing they weren’t lawyers! And good thing that the jury was free to disagree with their legal assessments! Several of Google’s key witnesses were, shall we say, vigorously cross-examined. And Oracle had a good story to tell: Google is a company that thinks it’s above the law and decided to save money by ripping off Oracle’s intellectual property. Google’s story was just better, and I think it’s replicable.
Are you holding out for actual, honest-to-goodness precedent? You might be in luck! Oracle is going to appeal, so we’ll have satisfied the first prerequisite of precedent. Oracle is likely to lose, for reasons I explained last time1I.e., jury verdict are hardly ever overturned, and there’s no reason to believe this one will be. The next question is whether we’ll get a “narrow” fact-bound appellate opinion, or a broad holding of more general applicability.

Now, funny thing about fair use. Last time I talked about how fact-intensive fair use is. This would normally indicate that the appellate opinion will be narrow. But sometimes fair use opinions are quite broad. A good example of that is the Ninth Circuit opinion that has been lurking behind this case: Sega Enterprises v. Accolade. Sega had two very important holdings. First, interoperability was a fair use2Even though “interoperable” wasn’t actually used by the court. Second, making intermediate, temporary copies in order to achieve a legitimate purpose (such as reverse-engineering code to achieve said interoperability) was also fair use. How can we be so sure, when fair use is so crazy and fact specific? For the same reason we can be so sure about true parody: sometimes the same fact affects all of the fair use factors in the same way. In Sega, the policy of encouraging competition—not letting copyright achieve a monopoly greater than what copyright law was meant to provide—caused the first, second and fourth factors to lean in favor of fair use. Only the third factor weighed against, and the competition policy reduced that weight.

Could something like that happen here? If you feel you must use an API library’s organization, you’d use it the same way Google did (just with less amateur legal opinionating that come back to haunt you later). Your facts will look a lot like Google’s, and you won’t make the mistakes Google made. And you’ll have an appellate opinion to point to, and your opponent will have little room to distinguish your case from Oracle v. Google. Most opponents that have more legal sense than money won’t even try. If someone does try, you might even be able to get out relatively cheaply at the pleadings stage (i.e., before expensive “discovery” has started), or at summary judgment (after at least some discovery has been taken, but before trial), since the operative facts would likely be undisputed.

One final thought about the trial. Several of the live-tweeters I was following seemed to think that Oracle was “winning” the case when its counsel seemed to score points during cross-examination. Oracle’s counsel was able to do so with some drama, by yelling, making the witnesses look flustered, and punctuating the air while loudly declaiming the names of various sweets.4I.e., the code names of various version of Android: Cupcake! Donut! Eclair! Froyo! Gingerbread! Honeycomb! Ice! Cream! Sand! Wich! Jelly! Bean! Kit! Kat! Lol! Li! Pop! Marshmallow!

These were not good moments for Oracle, actually. For one thing, judging from the time stamps, they were taking far too long—and Oracle had precious little time to begin with. And the points they were scoring didn’t go directly to the story Oracle wanted tell. They were just designed to hurt the general credibility of the witness. But it sounded as though the witnesses stood firm long enough that the Oracle lawyer started to lose his or her composure. When a lawyer is browbeating a witness on the stand, it looks to the jury like a bully picking on a kid who can’t get up and leave. And when the payoff is only that the witness has some contradictions, but not about anything that crucial to either party’s story, and it took so long that the jury forgot the point of it all, then all you’ve done is hurt your own case.

Many clients believe that good lawyering is what is shown on TV. But juries don’t see it that way—which is funny, since they watch the same TV shows. But jurors’ perspective is different: they’re trying to figure out who is right and who is wrong, not who is most dramatic. They try hard, they really do, and they reward those who make their jobs easier.

Google, by contrast, had no such problems. Its lawyers stayed on message throughout the trial. Oracle, by trying to do too much with cross-examination, chopped up its story and spiced it with acrimony. Worse, its lawyers spent so much time on cross-examination during Google’s case that they didn’t have enough time to put on its own case effectively.

If nothing else, Oracle v. Google shows how software just isn’t a good fit copyright.

At the same time, software isn’t a great fit for patent law either, even before Alice.9Alice is a Supreme Court decision that made it harder to obtain patent protection for software-based inventions. Patent protects only the ideas and functionality, but it doesn’t protect a programmer’s code itself. There might be several ways to implement an idea, but patent doesn’t care how you implement it with software. Put another way, the programmer’s craft doesn’t enter the patent discussion. Indeed, the inventor of a software-based patent doesn’t have to be—and often isn’t—a programmer. It could be a CEO who had a brainwave and hired a programmer to make it a reality. Actually, the CEO doesn’t even need to do that, so long as the necessary software is something that a competent programmer could pull off.

The Programmer’s Craft and the Lawyer’s Craft

There are a couple of themes here. First, the programmer’s craft gets short shrift. Second, business of buying and selling software doesn’t conform with our normal experience of buying things, even other copyrighted things. If we looked at software as its own regime of protection, we could directly address the policy behind concepts like interoperability, open source, computer languages, and so forth, without risking violence to the protections afforded to other types of copyrighted works.

The only solution is a Congressional one, and I’m not holding my breath. First of all, although Congress is in the middle of a high-level review of copyright law, I don’t think software protection is on the agenda. Second, the fate of § 117 shows that Congress is too timid to really strike a balance. Section 117 was meant to let you make a temporary copy of software so you could use it, but Congress lost its nerve and made a crucial change that threw the whole thing into confusion. If Congress won’t protect your right to use something you paid for10Yes, you really just bought a license. But did you read it? Did you understand it? Should you have consulted a lawyer first? Would it have made any difference since the license isn’t really part of a bargain but of a contract of adhesion? Commerce shouldn’t work this way., what chance do you think it’ll strike a good balance between programmers, their employers, consumers and the open source community?

Well, unless and until we have a good separate protection regime for software, we lawyers will just have to find creative11Ahem. ways to make software fit into the various boxes copyright (and patent and trade secret) present to us—some fair use here, some copyrightability there, some idea-express over there—and to come up with creative12Again, ahem sources of proof and analogies for judges and juries. As we saw in the Oracle v. Google trial, not all of them are going to work well, but every non-literal software copyright case is going to be an adventure and an experiment. May as well get used to it.